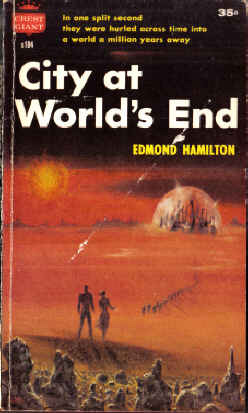 Description:
The pleasant little American city of Middletown is the first target in an atomic war -- but instead of blowing Middletown to smithereens, the super-hydrogen bomb blows it right off the map -- to somewhere else in the unimaginably far-distant future.

Lord of the World
by Robert Hugh Benson - Feedbooks
Lord of the World is a 1908 apocalyptic novel by Benson. The novel imagines a socialist and humanist world where religion has been either suppressed or ignored. People have no history or hope so they often turn to euthanasia, which is legal.
(5877 views)

C-Shapes
by Matthew Fish
Eight years after a virus caused half of the population of the world to go mentally unstable, a man named Ethan chase signs up to become a caretaker for two unstables. One of them, a 'Mirror' and the other a highly functioning 'Amnesiac.'
(4461 views)

2120 Titus
by Razor Blade - Smashwords
A 17 km wide asteroid named 2120 Titus is heading towards a collision with Earth. A known object for over a hundred years, scientists struggle to understand why the asteroid is heading towards Earth and why it is emitting an intelligent radio signal.
(2117 views)