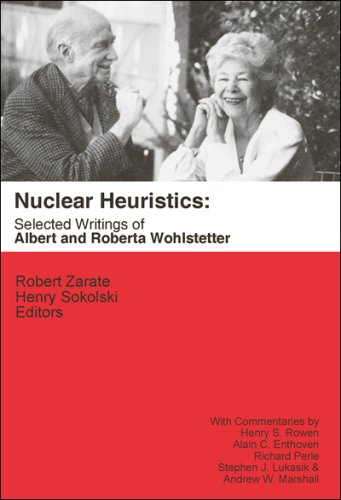 Description:
The book demonstrates not only the historical importance, but also the continuing relevance of the Wohlstetters' work in national security strategy and nuclear policy. It is the first book to make widely available over twenty of Albert and Roberta's most influential published and unpublished writings.

Strategy in the Missile Age
by Bernard Brodie - RAND Corporation
The book was written during the dawn of the nuclear age, when the advent of intercontinental ballistic missiles necessitated a massive rethinking of military strategy and power. Originally published in 1959, it retains ample relevance today.
(6845 views)

Selection and Use of Strategic Air Bases
by Albert Wohlstetter, et al. - RAND Corporation
An examination of the critical factors in strategic-base selection and an application of this analysis. The factors considered are the distances from bases to targets, to favorable entry points into enemy defenses, and to the source of base supply.
(5571 views)

Collective Defense or Strategic Independence
by Ted Galen Carpenter (ed.) - Cato Institute
The doctrine of collective defense has governed U.S. foreign policy for more than four decades and has enjoyed public consensus. But now prominent figures on both the left and the right are advocating a new look at America's global commitments.
(2096 views)

Some principles of maritime strategy
by Julian Stafford Corbett - Naval & Military Press
The book covers the theory of naval war, command of the sea, the constitution of fleets, concentration and dispersal of force, typical forms of naval operations, methods of securing and disputing command, methods of exercising command, and more.
(9585 views)