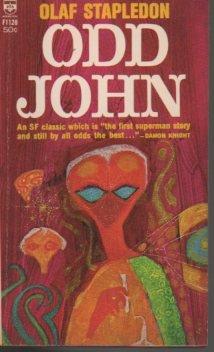 Odd John: A Story Between Jest and Earnest
by Olaf Stapledon

Description:
A strange looking child, John, was born to an ordinary family, but he was endowed with intellectual and physical characteristics as advanced from us as we are from are our immediate primate ancestors. Definitive fictionalization of mutated superman.

Gladiator
by Philip Wylie
Gladiator is a brave novel that unflinchingly portrays people at their ugliest and pettiest, while reflecting on the better worlds that could be were it not for humanity's relentless failings. The novel inspired the comic-book character Superman.
(4016 views)

Superhuman Nature
by Brandon Overall
Neil spent his whole life believing he would amount to greatness. A dream led to the awakening of a dormant power, and his life would never be ordinary again. When the government learned of his abilities, they knew they needed him on their side.
(4073 views)

Thicker Than Blood
by M. A. Newhall - Lulu.com
The flip of a switch gives Joe superhuman abilities. He discovers his new powers after his aunt saves his life with restricted nanites. When his secret is discovered, everyone he knows is thrust into a world of deception and treason.
(4045 views)