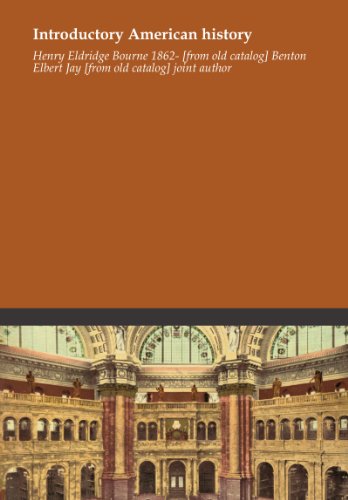 Description:
This volume is the introductory part of a course in American history embodying the plan of study recommended by the Committee of Eight of the American Historical Association. The plan calls for a continuous course running through grades six seven and eight.

The Decline of the American Republic
by John T. Flynn - Mises Institute
In 1955, John T. Flynn saw what few others journalist did: the welfare-warfare state conspired to bring down American liberty. The New Deal combined with World War Two had fastened leviathan control over a country born in liberty.
(13561 views)

Presidents' Body Counts
by Al Carroll - Smashwords
Speak No Evil About Presidents. So say most journalists, commentators, and historians. Not in this book. An eye opening look at all the evil done by presidents, mass murder, incompetence, and terrorism, and a look at the noblest presidents also.
(11347 views)

US History
- Wikibooks
The textbook covers everything that US history students study in high school or college. The contents: the history of colonial america, the early republic, antebellum america, the republic from 1877 to 1989, and from 1989 to the election 2008.
(14373 views)

Outline of U.S. History
by G. Clack, M. S. Neely, A. Hamby - Nova Science
A chronological look at how the United States took shape -- from its origins as an obscure set of colonies on the Atlantic coast a little more than 200 years ago into what one political analyst today calls the first universal nation.
(13710 views)