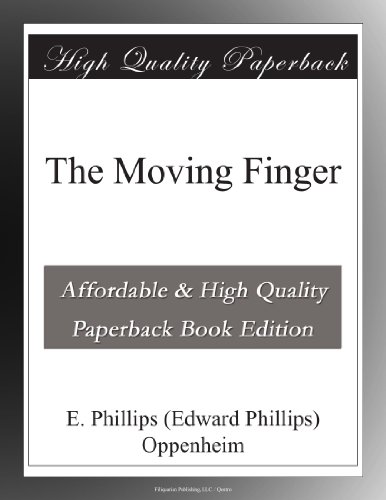 Description:
A mystifying story dealing with a wealthy M.P.'s experiment with a poor young man. The MP is also a knight and a wealthy landowner. The tale pulsates with life and is truly startling in some of its revelations. (Also published with the title The Falling Star).

A Maker of History
by E. Phillips Oppenheim - Little, Brown, and Company
Young Guy Poynton accidentally witnesses a clandestine political meeting in a remote forest on the border of Russia and Germany. Several weeks later he disappears from a night club in Paris. His lovely sister Phyllis arrives the next day...
(3131 views)

Harvey Garrard's Crime
by E. Phillips Oppenheim - A. L. Burt and Co.
Harvey Garrard's misdeed is excusably committed when he faces the first serious difficulty of his hitherto untroubled life. If he grasps this chance of victory over unfair odds, it is with the firm resolve to make full restitution ...
(1995 views)

Mysterious Mr. Sabin
by E. Phillips Oppenheim - Ward, Lock & Co.
When Lord Wolfenden saw a beautiful woman and became acquainted with her by saving the life of her elderly companion, the mysterious Mr. Sabin, as they leave the restaurant, he little knew the web of intrigue into which he was entering ...
(2452 views)

The Great Impersonation
by E. Phillips Oppenheim - Project Gutenberg
This is the best of the many spy thriller which Oppenheim wrote from the Edwardian era into the 1940s. The plot hinges around two very similar looking gentlemen, one from Britain and the other from Germany -- they happen to be related.
(6181 views)