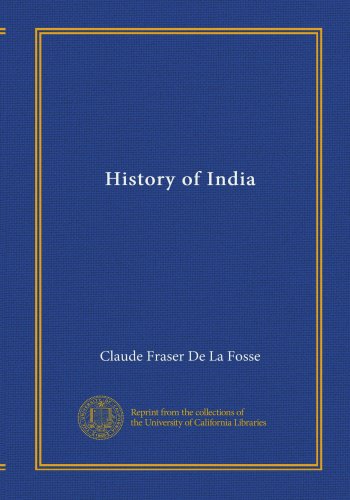 Description:
The book deals with events which are deemed to merit consideration in a general survey of the history of the country, and it remains, as far as it is possible to make it, a connected and consecutive account from the earliest times down to the present day.

Orissa under the Bhauma Kings
by Pandit Binayak Misra - Vishwamitra Press
This monograph discusses the problems connected with the Bhauma family. For easy comprehension of the subject the book gives the texts and translations of almost all the published Bhauma records and a large number of inscriptions.
(16032 views)

Kabir And The Kabir Panth
by G.H Westcott - Hesperides Press
Of all the great Hindu reformers, Kabir have had the greatest influence among the uneducated classes of Northern and Central India. He was described as the Indian Luther. The number of those who are under the influence of Kabir is great.
(16892 views)

Modern India
by William Eleroy Curtis - Fleming H. Revell Co.
A series of letters written during the winter of 1903-04: The Eye of India; The City of Bombay; Servants, Hotels, and Cave Temples; The Empire of India; Two Hindu Weddings; The Religions of India; How India Is Governed; The Railways of India; etc.
(32406 views)

Man-Eaters of Kumaon
by Jim Corbett - Oxford University Press
Jim Corbett killed a leopard at the age of nine and achieved a legendary reputation as a hunter. Here is the best of his books, which offers fascinating tales of pursuing tigers in the Indian Himalayas during the beginning of 20th century.
(27012 views)