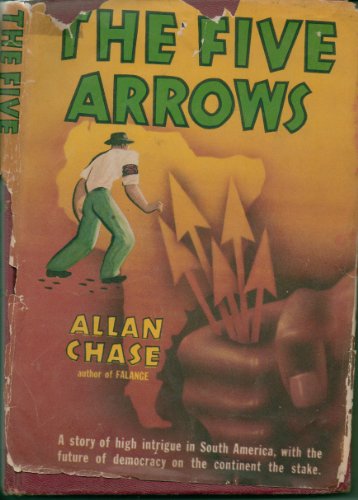 The Five Arrows
by Allan Chase

Description:
A story of high intrigue in South America, with the future of democracy on the continent the stake. The bombing of Pearl Harbor was still very much a topic of conversation on the island; the submarine nets in the bay were joked about at the dinner table, but the jokes arose from a profound sense of gratitude for the nets, the planes, the ships which were the island's defenses against the undersea raiders that stalked the sea lanes between the ports of the mainland and San Juan.

Their Own Game
by Duncan James - Smashwords
A top secret plan shifts the war on terrorism from the Middle East to Northern Ireland. Major Bill Clayton and his attractive sergeant Catherine Wilson hunt the killer of Clayton's uncle who was involved with Libyan terrorist weapons suppliers.
(6763 views)

Sharing Her Crime
by May Agnes Fleming - G. W. Carleton & Co.
Another of Fleming's convoluted romances, full of dark murders, evil plots, dire prophecies and exaggerated characters. The novel centers on the tempestuous Gipsy Gower, who runs roughshod over the inhabitants of the village of St. Mark's.
(6724 views)