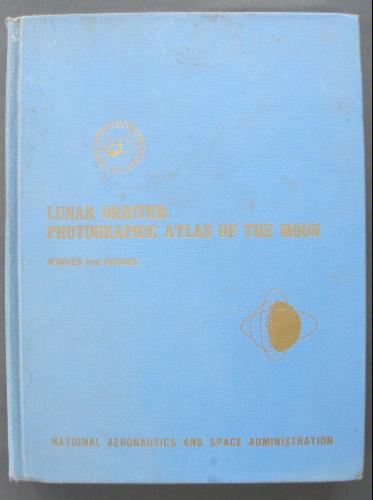 Description:
The Lunar Orbiter Photographic Atlas of the Moon by Bowker and Hughes (NASA SP-206) is considered the definitive reference manual to the global photographic coverage of the Moon. The images contained within the atlas are excellent for studying lunar morphology because they were obtained at low to moderate Sun angles.

Mercury
by F. Vilas, C. Chapman, M. Matthews - University of Arizona Press
The book on the planet's origin, its metal-rich composition, its thermal and geophysical evolution, and its cratering history. These topics are complex and controversial, and this book contains a variety of new perspectives on them.
(11745 views)

To a Rocky Moon: A Geologist's History of Lunar Exploration
by Don E. Wilhelms - University of Arizona Press
Don Wilhelms was a member of the Apollo Scientific Team. In this book he describes his role, along with his colleagues, during the Apollo explorations of the Moon. He presents a brief history of the theories associated with the origin of the moon.
(8318 views)

Pioneer Saturn Encounter
- NASA
Pioneer 11 made the first flyby of Saturn almost a billion miles from Earth where it came within 13300 miles of the cloud tops. Assembled in this publication is a selection of the pictures returned by Pioneer 11 of Saturn and its largest moon, Titan.
(4542 views)

The Story of Eclipses
by George F. Chambers - S. S. McClure Co.
The book presents in a readable, yet soundly scientific, language a popular account of eclipses of the Sun and Moon, and very briefly of certain kindred astronomical phenomena similar to those which operate in connection with eclipses.
(8916 views)