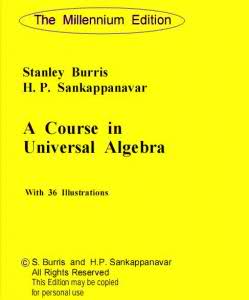 A Course in Universal Algebra
by S. Burris, H.P. Sankappanavar

Description:
This text is not intended to be encyclopedic; rather, a few themes central to universal algebra have been developed suficiently to bring the reader to the brink of current research. The choice of topics most certainly reflects the authors' interests: a brief but substantial introduction to lattices, the most general and fundamental notions of universal algebra, a careful development of Boolean algebras, discriminator varieties, the introduction to some basic concepts, tools, and results of model theory.

Commutator Theory for Congruence Modular Varieties
by Ralph Freese, Ralph McKenzie - Cambridge University Press
This book presents the basic theory of commutators in congruence modular varieties and some of its strongest applications. The authors take an algebraic approach, using some of the shortcuts that Taylor and others have discovered.
(11640 views)

Smarandache Near-rings
by W. B. Vasantha Kandasamy - American Research Press
Near-rings are one of the generalized structures of rings. This is a book on Smarandache near-rings where the Smarandache analogues of the near-ring concepts are developed. The reader is expected to have a background in algebra and in near-rings.
(12196 views)