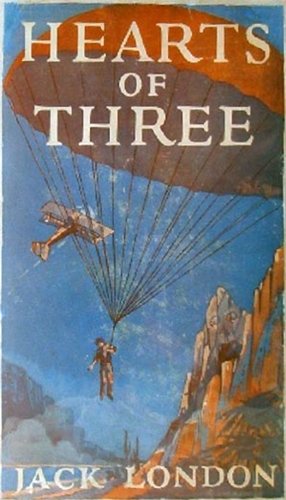 Hearts of Three
by Jack London

Description:
Two men exactly alike in appearance, hunting for a treasure in the South sea islands, start the complication in this scenario novel written by Jack London. Graphic, clear and thrilling in style and with much of the old charm.

The Call of the Wild
by Jack London - Review of Reviews co
London's masterpiece is written in 1903 and based on his adventures in the Canadian wildernes. This is an engrossing tale about the struggle for survival and existence in the frozen land of Alaska. A story about unbreakable spirit of a dog.
(20613 views)

The Son of the Wolf
by Jack London - ManyBooks
These nine stories all take place during the Klondike gold rush of 1897. Unusual for a London collection, the tales are all loosely connected by a cast of recurring characters -- the inhabitants of Forty Mile, a town in the Yukon Territory.
(6858 views)

The Star Rover
by Jack London - eBooks@Adelaide
A framing story is told in the first person by Darrell Standing, a university professor serving life imprisonment in San Quentin State Prison for murder. Prison officials try to break his spirit by means of a torture device called 'the jacket'.
(3904 views)

Smoke Bellew
by Jack London - The Century Co.
A group of short stories published in 1912. It takes us to the sub-zero temperatures of the Klondike during the Alaskan gold-rush days of 1897 in more London scribed adventures supporting his belief in Darwin's theory: Survival of the Fittest.
(4178 views)