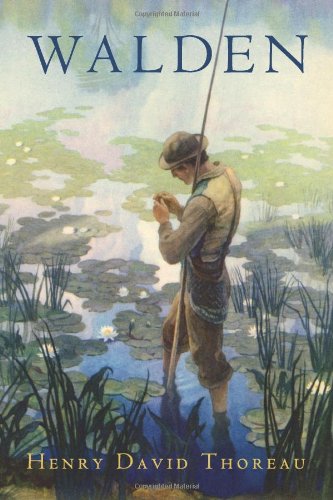 Description:
In 1845, Henry David Thoreau moved into a cabin by Walden Pond. With the intention of immersing himself in nature and distancing himself from the distractions of social life, Thoreau sustained his retreat for just over two years. More popular than ever, 'Walden' is a paean to the virtues of simplicity and self-sufficiency.

Up the Mazaruni for Diamonds
by William la Varre - Marshall Jones Company
William la Varre is adventuring in the right spirit. His diamond hunting is instructive as well as interesting. He has brought back from the field information which will help others who intend to traverse similar trails...
(6061 views)

The Maine Woods
by Henry David Thoreau - Boston Houghton
Over a period of three years, Thoreau made three trips to the woods of Maine. He climbed mountains, paddled a canoe, and dined on cedar beer, hemlock tea and moose lips. He captured a wilder side of America and revealed his own adventurous spirit.
(8139 views)

What Bird is That?
by Frank M. Chapman - D. Appleton & co
A pocket museum of the land birds of the eastern United States arranged according to season. The birds are drawn and reproduced with such accuracy that no essential detail of color or form is lost. They are all drawn to nearly the same scale.
(12599 views)