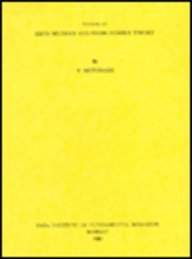 Description:
The aim of these lectures is to introduce the readers to the most fascinating aspects of the fruitful unifications of sieve methods and analytical means which made possible such deep developments in prime number theory ...

On Advanced Analytic Number Theory
by C.L. Siegel - Tata Institute of Fundamental Research
During the winter semester 1959/60, the author delivered a series of lectures on Analytic Number Theory. It was his aim to introduce his hearers to some of the important and beautiful ideas which were developed by L. Kronecker and E. Hecke.
(6944 views)

Diophantine Analysis
by R. D. Carmichael - John Wiley & Sons
The author's purpose has been to supply the reader with a convenient introduction to Diophantine Analysis. No attempt has been made to include all special results, but a large number of them are to be found both in the text and in the exercises.
(9192 views)

Lectures on The Riemann Zeta-Function
by K. Chandrasekharan - Tata Institute of Fundamental Research
These notes provide an intorduction to the theory of the Riemann Zeta-function for students who might later want to do research on the subject. The Prime Number Theorem, Hardy's theorem, and Hamburger's theorem are the principal results proved here.
(8802 views)