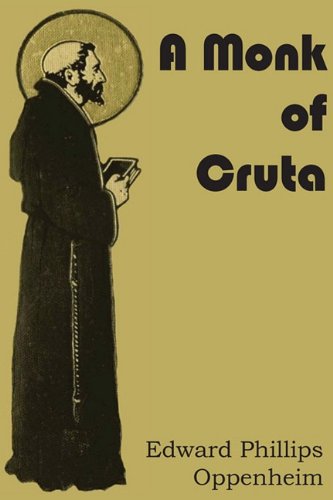 A Monk of Cruta
by E. Phillips Oppenheim

Description:
The convoluted story involves a wealthy Englishman who falls in love with the daughter of an Italian nobleman who lives on the island of Cruta in the Mediterranean. An involved and curious monastic romance with a secret revealed at the last moment. A thoroughly dramatic narrative.

The Postmaster of Market Deignton
by E. Phillips Oppenheim - Ward, Lock & Co.
Mr Norman Scott is a young physician with a busy practice in London. He is called to visit a patient, Mr Humphrey Deignton, in the country, who suffers from gout. Dr. Scott has been smitten by Lord Deignton's lovely wife. Lord Deignton is murdered...
(1712 views)

The Glenlitten Murder
by E. Phillips Oppenheim - The Chicago Tribune
Glenlitten Manor is the home of Andrew, Marquis Glenlitten, and his lovely, tiny wife, Felice. On the night of a small game hunt, the somewhat unsavory Baron de Bresset is murdered, while Lady Felice's family heirloom diamond necklace is stolen ...
(2128 views)

The Moving Finger
by E. Phillips Oppenheim - ManyBooks
A mystifying story dealing with a wealthy M.P.'s experiment with a poor young man. The MP is also a knight and a wealthy landowner. The tale pulsates with life and is truly startling in some of its revelations. (Also published as The Falling Star).
(6347 views)

A Maker of History
by E. Phillips Oppenheim - Little, Brown, and Company
Young Guy Poynton accidentally witnesses a clandestine political meeting in a remote forest on the border of Russia and Germany. Several weeks later he disappears from a night club in Paris. His lovely sister Phyllis arrives the next day...
(3061 views)