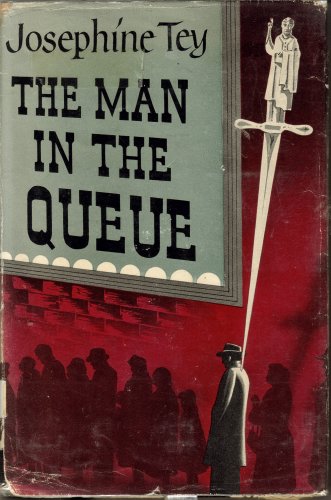 The Man in the Queue
by Josephine Tey

Description:
Outside a London theatre a throng of people wait expectantly for the last performance of a popular musical. But as the doors open at last, something spoils all thought of entertainment: a man in the queue is found murdered by the deadly thrust of a stiletto...

The Franchise Affair
by Josephine Tey - Macmillan
Marion Sharpe and her mother seem an unlikely duo to be found on the wrong side of the law ... until the police turn up with a demure young woman on their doorstep accusing them of kidnap and abuse. She can back up her claim ...
(4595 views)

The Daughter of Time
by Josephine Tey - Peter Davies
Tey's classic novel about Richard III, the hunchback king, whose skeleton was discovered in a council carpark. This novel investigates his role in the death of his nephews, the princes in the Tower, and his own death at the Battle of Bosworth.
(2192 views)

A Shilling for Candles
by Josephine Tey
Beneath the sea cliffs of the south coast, suicides are a sad but common fact. Yet even the coastguard knows something is wrong when a young film actress is found lying dead on the beach. Inspector Grant has to take a more professional attitude...
(6010 views)