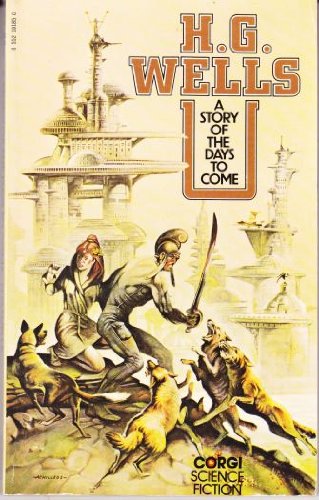 A Story of the Days To Come
by H. G. Wells

Description:
The excellent Mr. Morris was an Englishman, and he lived in the days of Queen Victoria the Good. He was a prosperous and very sensible man; he read the Times and went to church, and as he grew towards middle age an expression of quiet contented contempt for all who were not as himself settled on his face. He was one of those people who do everything that is right and proper and sensible with inevitable regularity...

The War of the Worlds
by H. G. Wells - Heinemann
The most famous science fiction novel which caused the mistaken panic after Orson Welles's radio dramatization in 1938. The human civilization is under threat, Martians build killing machines and burning rays. The Earth proves harder, however.
(9674 views)

Love and Mr Lewisham
by H. G. Wells
Young and ambitious science student is locked in a struggle to further himself through academic achievement. But when his former sweetheart re-enters his life, his strictly regimented existence is thrown into chaos by the resurgence of old passion.
(6184 views)

Men Like Gods
by H. G. Wells - Cassell & Co.
Science fiction novel featuring a utopian parallel universe. It is about a group of people who are drawn into an alternate dimension, which turns out to be a paradisiacal version of Earth thousands of years in ahead of contemporary society.
(9708 views)

When the Sleeper Wakes
by H. G. Wells
A dystopian science fiction novel about a man who sleeps for two hundred, waking up in a completely transformed London. The main character awakes to see his dreams realised, and the future revealed to him in all its horrors and malformities.
(1990 views)