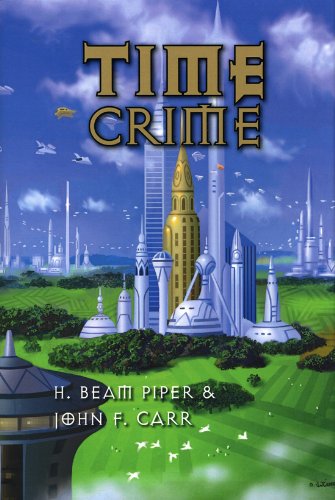 Description:
In the world in which Time Crime takes place, human society has developed the technology to move laterally between parallel universes. The heroes of this story, Verken Vall, and his wife, Hadron Dalla, are ready to embark on a long-overdue vacation, when the Paratime Police send them both to investigate rumors of slavery in the Esaron Sector. Like many of Piper's stories, this is a police procedural, set in the world of the future.

Key Out of Time
by Andre Norton - The World Publishing Company
Time Agents Ross Murdock and Gordon Ashe, aided by a Polynesian girl and telepathic dolphins, probe the mystery of the sea-planet named Hawaika. Its cities and civilizations have vanished but our agents are snatched back through a Time Gate ...
(2727 views)

Time Management for Mercenaries
by Dai Alanye
A mismatched team is recruited for primitive military action in a third world country. It is eventually revealed that they will, in fact, be journeying to the past. They run into many difficulties both before and after reaching their destination.
(6830 views)

Virtual Evil
by Jana G. Oliver - Dragon Moon Press
Jacynda's latest assignment is a double-edged sword: find the greatest of all Time Rovers and send him to 2057. If she returns Harter Defoe to the future, she ll be branded a traitor to her kind. If she fails, the punishment is a decade in prison.
(12776 views)

The Winds of Time
by James H. Schmitz
Star ships, aliens from the future, time travel, romance, cannibalism, pet humans and mute-but-brilliant aliens... and of course, it's got a hero who solves every problem by being smarter and trickier and better-prepared than we'd ever imagine being.
(2850 views)