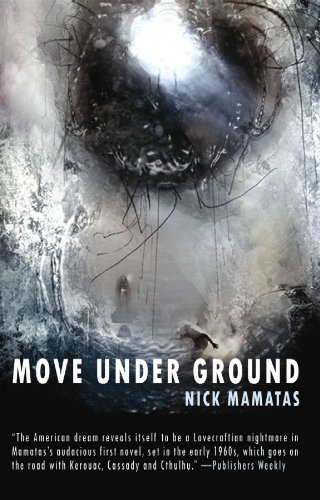 Move Under Ground
by Nick Mamatas

Description:
In this tour de force, which is Mamatas' first novel, the Beats meet the elder gods of H. P. Lovecraft, and a harrowing time is had by all. It's the early sixties, and Jack Kerouac is hiding from his public in Big Sur, enjoying the company of a Hindu deity in the form of a redhead he calls Marie and waiting for word from Neal Cassady, his and many another Beat's charismatic hero. Word he gets, including some babbling on about the Old Ones rising out of the Pacific and sweeping across America.

Mortal Ghost
by L. Lee Lowe - lleelowe.com
It's a fiery hot summer, and sixteen-year-old Jesse Wright is on the run. An oddly gifted boy, he arrives in a new city where the direction of his life is about to change. He is beset by visions of a stranger who is being brutally tortured.
(6879 views)

RuneCraft
by Michael J. Losacco
RuneCraft is the first book in a trilogy of high fantasy novels that explores deep, metaphysical themes. The story revolves around Peter Uriel, who, after making his transition, is sent to another world to save them from utter ruination.
(7714 views)

Reaper: Angel of Death
by G.P. Burdon
Darius, a human who lived as a slave until his untimely death allowed him to become a Reaper, discovers another Reaper is consuming the souls of innocent humans to gain power. Darius must thwart this rogue to restore humanity.
(7198 views)

Deserted Cities of the Heart
by Lewis Shiner - Subterranean Press
An anthropologist and his alienated brother reunite in Mexico to reenact an ancient Mayan myth of the end of the world in this surrealistic fantasy by the author of Frontera. Shiner captures the complexities of both modern and ancient reality.
(6898 views)