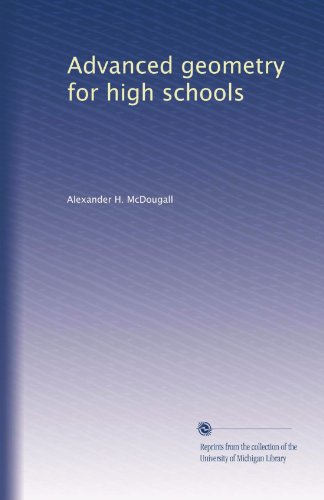 A. N. Whitehead's Geometric Algebra
by Stephen Blake
This is a text on 3-d Euclidean computational geometry intended to be used in engineering applications. On the other hand, the methods of Whitehead's algebra enable us to readily deal with Euclidean and non-Euclidean spaces of any dimension.
(12465 views)

Euclid's Elements of Geometry
by J.L. Heiberg, R. Fitzpatrick
Euclid's Elements is the most famous mathematical work of classical antiquity, and also has the distinction of being the oldest continuously used mathematical textbook. The main subjects of the work are geometry, proportion, and number theory.
(7454 views)

Coordinate Geometry
by Henry B. Fine, Henry D. Thompson - The MacMillan Company
Contents: Coordinates; The Straight Line; The Circle; The Parabola; The Ellipse; The Hyperbola; Transformation Of Coordinates; The General Equation Of The Second Degree; Sections Of A Cone; Systems Of Conics; Tangents And Polars Of The Conic; etc.
(12893 views)

Euclid and His Twentieth Century Rivals
by Nathaniel Miller
Miller discusses the history of diagrams in Euclidean Geometry, develops a formal system for working with them, and concludes that they can be used rigorously. Miller also introduces a diagrammatic computer proof system, based on this formal system.
(443 views)