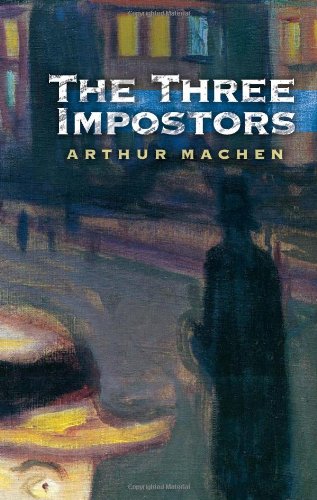 The Three Impostors
by Arthur Machen

Description:
In a novel that is at once richly terrifying and delightfully funny, a bustling suburb appears normal and cheerful -- but nothing is really as it seems. For in this world of impostors, conspiracies combine with dark forces, and one astonishing event follows another, veiling a once-ordinary community in a cloud of mystery.

The Secret Glory
by Arthur Machen - eBooks@Adelaide
The Secret Glory explores the life of a schoolboy who embraces the grail-myth, to find ecstasy and martyrdom. This is the first use of the idea in fiction of the Grail surviving into modern times in some form, an idea much utilized ever since.
(3827 views)

The Great God Pan
by Arthur Machen
A novella written by Arthur Machen in 1890. On publication it was widely denounced by the press as degenerate and horrific because of its decadent style and sexual content, although it has since garnered a reputation as a classic of horror.
(3378 views)

The Hill Of Dreams
by Arthur Machen - A.A. Knopf
The novel recounts the life of a young man, focusing on his dreamy childhood in rural Wales. The Hill of Dreams of the title is an old Roman fort where he has strange sensual visions, including ones of the town in the time of Roman Britain.
(6329 views)