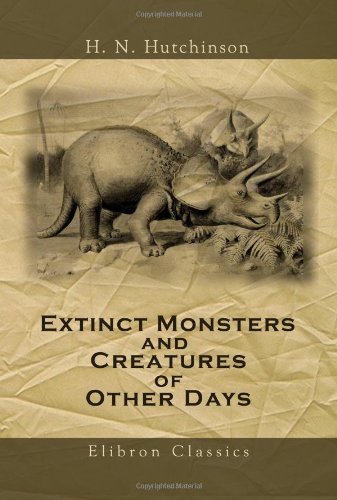 Description:
The object of this book is to describe some of the larger and more monstrous forms of the past -- the lost creations of the old world; to clothe their dry bones with flesh, and suggest for them backgrounds such as are indicated by the discoveries of geology: in other words, to endeavour, by means of pen and pencil, to bring them back to life.

Pioneers of Evolution from Thales to Huxley
by Edward Clodd - D. Appleton & co.
This book tells the story of the origin of the Evolution idea in Ionia, and, after long arrest, of the revival of that idea in modern times, when its profound and permanent influence on thought and on human relations and conduct, is apparent.
(5242 views)

Evolution and Philosophy: An Introduction
by John S. Wilkins - The TalkOrigins Archive
Critics of evolutionary theory very often misunderstand the issues of the philosophy of science. This essay summarises some of the more important recent developments to show that evolution is no worse off philosophically than any other science.
(5024 views)

Thinking Evolutionarily: Evolution Education Across the Life Sciences
by Jay B. Labov (ed.) - National Academies Press
Evolution is the central unifying theme of biology. Yet today, the topic is often relegated to a few class sessions in introductory biology courses, if covered at all. In recent years, a movement is aimed at radically changing this situation ...
(4989 views)