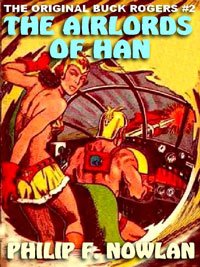 The Airlords of Han
by Philip Francis Nowlan

Description:
Nowlan's novella tells about America in the 25th century, conquered by Hans in 2109 A.D. and only now beginning to rebel. The Hans are invaders from Asia with highly advanced technology. They have great aircraft armed with disintegrator rays that turn whatever they hit into nothing.

First Lensman
by E. E. Smith - Pyramid Publications
The enemy spacefleet arrowed toward the armored mountain -- nerve center of the Galactic Patrol. The Patrol battle cruisers swerved to meet them, and a miles-long cone of pure energy ravened out at the invaders, destroying whatever it touched.
(4816 views)

Incursio
by Drew Wagar - Smashwords
When a deadly alien attack is launched across the galaxy, humankind finds itself under-prepared and overwhelmed. Privateers take up the battle alongside the military forces and a plan is hatched to stop the invaders before humanity is eradicated.
(9232 views)