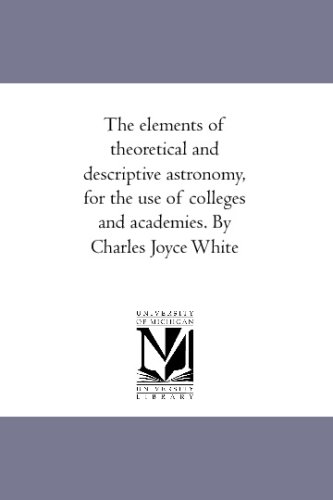 The Elements of Theoretical and Descriptive Astronomy
by Charles J. White

Description:
I endeavored to present the main facts and principles of Astronomy in a form adapted to the elementary course of instruction in that science which is commonly given at colleges and the higher grades of academies. I selected those topics which seemed to me to be the most important and the most interesting, and arranged them in the order which experience had led me to believe to be the best.

Hubble Space Telescope: Discoveries
- NASA
The book takes the reader on a tour of Hubble's most significant science successes, combined with some of the telescope's technology and history. The book details Hubble's work in cosmology, planetary science and galactic science.
(8068 views)

Astronomy
by Andrew Fraknoi, David Morrison, Sidney C. Wolff - Unglue.it
This book is designed to meet the scope and sequence requirements of one- or two-semester introductory astronomy courses. It begins with relevant fundamentals and progresses through an exploration of the solar system, stars, galaxies and cosmology.
(5539 views)

General Astronomy
- Wikibooks
This book introduces the advanced secondary or beginning university student to the process that revealed the rich tapestry of the universe to humanity, presenting astronomy not only as a field of knowledge, but also as a human endeavor in science.
(12143 views)