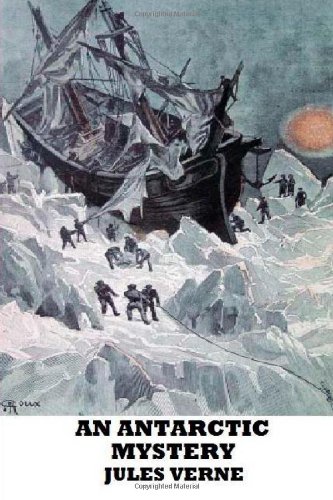 An Antartic Mystery
by Jules Verne

Description:
Inspired by Edgar Allan Poe's The Narrative of Arthur Gordon Pym of Nantucket, Jules Verne intended An Antarctic Mystery to complete the mystery of Pym's fate. A high-sea adventure, An Antarctic Mystery takes readers to the very edge of the world, where the mystery of Arthur Gordon Pym's fate is eventually revealed.

Around the World in 80 Days
by Jules Verne - eBooks@Adelaide
Phileas Fogg bets his companions £20,000 that he can travel around the globe in just eighty days. Combining exploration, adventure, and a thrilling race against time, this book gripped audiences and remains hugely popular to this day.
(11213 views)

Robur the Conqueror
by Jules Verne - eBooks@Adelaide
A science fiction novel by Jules Verne. The story begins with strange lights and sounds reported in the skies all over the world. The events are capped by the mysterious appearance of black flags with gold suns atop tall historic landmarks.
(5967 views)

Michael Strogoff, Or The Courier Of The Czar
by Jules Verne - Project Gutenberg
Considered one of Verne's best books by critics. Unlike some of Verne's other famous novels, it is not science fiction, but a scientific phenomenon is a plot device. The book has been adapted several times for films and cartoon series.
(6455 views)

Facing the Flag
by Jules Verne - The F. M. Lupton Publishing
One of the first books dealing with problems which was to become paramount half a century after its publication: brilliant scientists discovering new weapons of great destructive power, whose full utilization might literally destroy the world.
(5349 views)