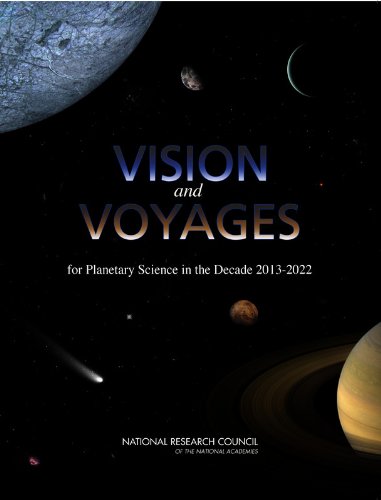 Vision and Voyages for Planetary Science in the Decade 2013-2022

Description:
This book surveys the current state of knowledge of the solar system and recommends a suite of planetary science flagship missions for the decade 2013-2022 that could provide a steady stream of important new discoveries about the solar system.

The Story of Eclipses
by George F. Chambers - S. S. McClure Co.
The book presents in a readable, yet soundly scientific, language a popular account of eclipses of the Sun and Moon, and very briefly of certain kindred astronomical phenomena similar to those which operate in connection with eclipses.
(8925 views)

Voyager 1 and 2: Atlas of Six Saturnian Satellites
by Raymond M. Batson - NASA
Published in 1984 after several years of photographic analysis, this book presents maps of the six Saturnian moons which were investigated by the Voyager 1 and 2 spacecraft during their flyby missions of Saturn in 1980 and 1981, respectively.
(13031 views)

Evolution of the Solar System
by Hannes Alfven, Gustaf Arrhenius - NASA
A realistic attempt to reconstruct the early history of the solar system. The authors chose a procedure which reduces speculation as much as possible and connects the evolutionary models as closely as possible to experiment and observation.
(10126 views)