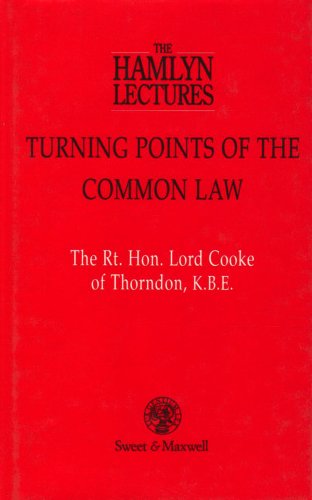 Turning Points of the Common Law
by Robin Brunskill Cooke

Description:
In this book, based on the 48th series of Hamlyn Lectures, Lord Cooke focuses on four great cases which were all major turning points in the development of the common law. In each instance he examines the effect at the time, subsequent developments in case law and academic opinion, and the respective advantages of decisions in Commonwealth jurisdictions.

Curious Punishments of Bygone Days
by Alice Morse Earle - Loompanics Unlimited
An accumulation of notes on old-time laws, punishments and penalties. The subject is not a pleasant one, though it often has a humorous element; but a punishment that is obsolete gains an interest and dignity from antiquity.
(9633 views)

America Without the Death Penalty
by John F. Galliher, et al. - Northeastern University Press
As the struggle over capital punishment rages on, twelve states have taken bold measures to eliminate the practice. This landmark study is the first to examine the history and motivations of those jurisdictions that abolished capital punishment.
(3703 views)