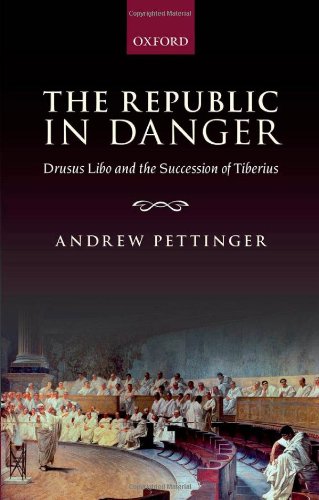 The Republic in Danger: Drusus Libo and the Succession of Tiberius
by Andrew Pettinger

Description:
'The Republic in Danger' offers a new interpretation of Roman political history for the years 6 BC to AD 16, focusing especially on the rise of Tiberius Caesar and his succession to Augustus, the founder of the Principate.

Old Rome
by Robert Burn - George Bell & Sons
This is a handbook to the ruins and monuments of ancient Rome and the Campagna. It is divided into topographical sections for the convenience of travelers visiting Rome, and the monuments which exist in each section have been briefly described.
(4584 views)

A Lightning Spark for Pompeian Visitors
by Vittorio Macchioro - Mary E. Raiola
The author gives to those who visit Pompei some ideas that may be for them a kind of lightning spark, so that they may penetrate into the very heart of the Roman civilization, and look at it and consider it like a live matter.
(6245 views)

Power and Status in the Roman Empire, AD 193-284
by Inge Mennen - BRILL
This book deals with changing power and status relations between the highest ranking representatives of Roman imperial power at the central level, in a period when the Empire came under tremendous pressure , AD 193 - 284.
(2666 views)