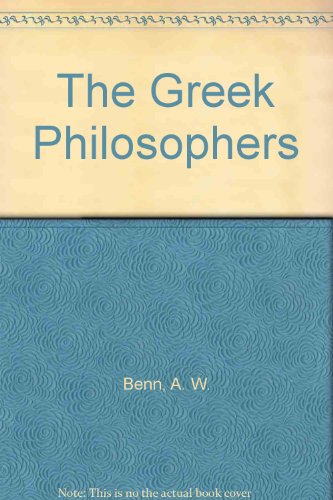 Description:
The appearance of a new idea can only be made intelligible by tracing the previous tendencies which it either continues, combines, or contradicts. The history of philosophy has itself a philosophy which requires that we should go beyond particular phenomena and view them as variously related parts of a single system.

Arabic Thought and Its Place in History
by De Lacy O'Leary - Kegan Paul and Company
A study of the mutual influence of Arabic and Western worlds during the Middle Ages. It traces the transmission of Greek philosophy and science to the Islamic cultures. The book presents a fascinating portrait of medieval Muslim thought.
(17516 views)

The Philosophy of Immanuel Kant
by A. D. Lindsay - T.C. & E.C. Jack
All that the writer of a book like this can hope to do is to persuade others to undertake that study by interesting them in the problems with which it deals, and by offering a few suggestions which may help to an understanding of it.
(4083 views)

Greek Philosophy, Thales to Plato
by John Burnet - MacMillan
The author's chief aim has been to assist students who wish to acquire a firsthand knowledge of what Plato actually says in the dialogues of his maturity. John Burnet was a Scottish classicist, best known for his work on Plato.
(8657 views)

Against the Men of the Crowd
by Cassius Amicus - Smashwords
This volume is a Guide to the Ancient Philosophy of Independent Thinking And Personal Happiness, Based on the Texts of Its Founder and Leading Proponents. Prepared from the ancient texts of Epicurus, Lucretius, Diogenes of Oinoinda, and others.
(4255 views)