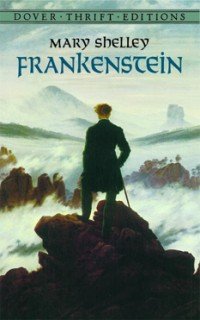 Description:
The story of Victor Frankenstein's monstrous creation and the havoc it caused has enthralled generations of readers and inspired countless writers of horror and suspense. Frankenstein, loved by many decades of readers and praised by such eminent literary critics as Harold Bloom, seems hardly to need a recommendation. If you haven't read it recently, though, you may not remember the sweeping force of the prose, the grotesque, surreal imagery, and the multilayered doppelgänger themes of Mary Shelley's masterpiece.

The Undying Monster: A Tale of the Fifth Dimension
by Jessie Douglas Kerruish - Heath Cranton Limited
For generations, the Hammand family has lived under the shadow of a deadly curse. It will sleep for a time, only to burst into deadly life; it will leave its victims with such terrible, unspeakable memories that they go mad with the knowledge of it.
(5089 views)

Butcher Bird
by Richard Kadrey - Night Shade Books
Spyder Lee is a happy man who owns a tattoo shop. One night a demon tries to bite his head off before he’s saved by a stranger. The demon infected Spyder so that he can suddenly see the world as it really is: full of angels, demons and monsters.
(13524 views)

The Dark Other
by Stanley G. Weinbaum - Fantasy Publishing Co.
Patricia is in love with Nicholas Devine. Suddenly, things turn grim -- Nicholas undergoes a mysterious change and becomes cold and calculating. Patricia consults a psychologist Dr. Carl Horker to try and figure out what has happened ...
(2356 views)