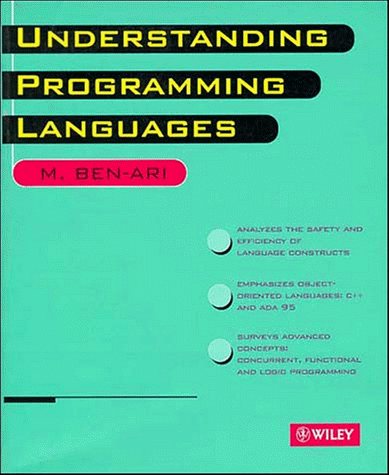 Description:
Understanding Programming Languages explains what alternatives are available to the language designer, how language constructs should be used for safety and readability, how language constructs are implemented, the role of language in expressing and enforcing abstractions. The book compares constructs from C with constructs from Ada in terms of levels of abstraction. Studying these languages provides a firm foundation for an extensive examination of object-oriented language support in C++ and Ada 95. The final chapters introduce functional (ML) and logic (Prolog) programming languages to demonstrate that imperative languages are not conceptual necessities for programming.

Formal Syntax and Semantics of Programming Languages
by Kenneth Slonneger, Barry L. Kurtz - Addison Wesley Longman
The book presents the typically difficult subject of formal methods in an informal, easy-to-follow manner. Readers with a basic grounding in discreet mathematics will be able to understand the practical applications of these difficult concepts.
(14922 views)

Concrete Semantics: With Isabelle/HOL
by Tobias Nipkow, Gerwin Klein - Springer
The book teaches the reader the art of precise logical reasoning and the practical use of a proof assistant as a tool for formal proofs about computer science artefacts. All the mathematics is formalised in Isabelle and much of it is executable.
(5472 views)