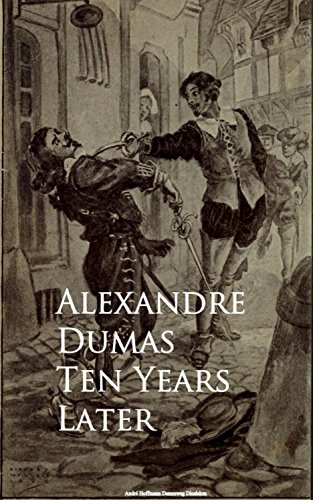 Description:
Ten Years Later is the third and last of the d'Artagnan Romances, following The Three Musketeers and Twenty Years After. The principal heroes of the novel are the musketeers. The narrative of this novel is set between 1660 and 1673.

The Conspirators: or, The Chevalier d'Harmental
by Alexandre Dumas - Peter Fenelon Collier
On the 22d of March, in the year of 1718, a young cavalier of high bearing, about twenty-six or twenty-eight years of age, mounted on a pure-bred Spanish charger, was waiting, toward eight o'clock in the morning, at that end of the Pont Neuf...
(4700 views)

Twenty Years After
by Alexandre Dumas - ManyBooks
Two decades have passed since the musketeers triumphed over Cardinal Richelieu and Milady. The fantastic adventures of the Three Musketeers continue - starting with an intrigue surrounding D'Artagnan who has, for twenty years, remained a lieutenant.
(5931 views)