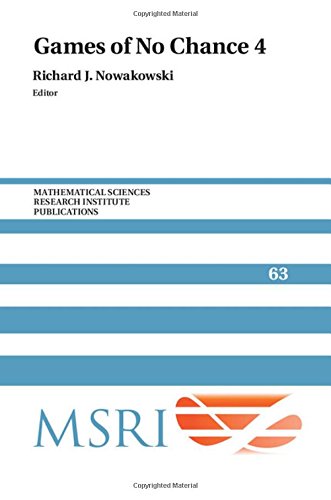 Games of No Chance 4
by Richard J. Nowakowski (ed.)

Description:
The volume contains the first comprehensive explorations of misère games. It includes a tutorial for the very successful approach to analyzing misère impartial games and the first attempt at using it for misère partisan games. It also includes an updated version of Unsolved Problems in Combinatorial Game Theory and the Combinatorial Games Bibliography.

An Introduction to Quantum Game Theory
by J. Orlin Grabbe - arXiv
This essay gives a self-contained introduction to quantum game theory, and is primarily oriented to economists with little or no acquaintance with quantum mechanics. It assumes little more than a basic knowledge of vector algebra.
(9101 views)

Game Theory
by Giacomo Bonanno - University of California, Davis
This is a textbook on non-cooperative Game Theory with 165 solved exercises. It is intended to be rigorous and it includes several proofs. It is appropriate for an undergraduate class in game theory and also for a first-year graduate-level class.
(7108 views)