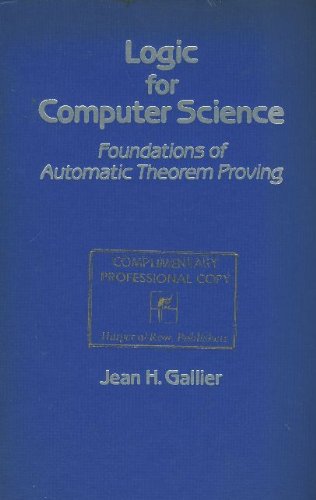 Description:
This book is intended as an introduction to mathematical logic, with an emphasis on proof theory and procedures for constructing formal proofs of formulae algorithmically. Since the main emphasis of the text is on the study of proof systems and algorithmic methods for constructing proofs, it contains some features rarely found in other texts on logic. This book is designed primarily for computer scientists, and more generally, for mathematically inclined readers interested in the formalization of proofs, and the foundations of automatic theorem-proving.

Logic and Proof
by Lawrence C Paulson - University of Cambridge
These lecture notes give a brief introduction to logic, with including the resolution method of theorem-proving and its relation to the programming language Prolog. Formal logic is used for specifying and verifying computer systems.
(12493 views)

Proof Theory and Philosophy
by Greg Restall - consequently.org
A textbook in philosophical logic, accessible to someone who's done only an intro course in logic, covering some model theory and proof theory of propositional logic, and predicate logic. User-friendly and philosophically motivated presentation.
(10804 views)

Proofs and Types
by J. Girard, Y. Lafont, P. Taylor - Cambridge University Press
This little book comes from a short graduate course on typed lambda-calculus given at the Universite Paris. It is not intended to be encyclopedic and the selection of topics was really quite haphazard. Some very basic knowledge of logic is needed.
(15526 views)