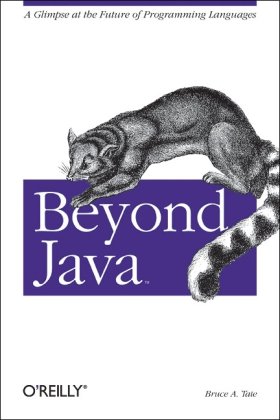 Beyond Java
by Bruce Tate

Description:
Bruce Tate chronicles the rise of the most successful language of all time, and then lays out, in painstaking detail, the compromises the founders had to make to establish success. Then, he describes the characteristics of likely successors to Java. He builds to a rapid and heady climax, presenting alternative languages and frameworks with productivity and innovation unmatched in Java. He closes with an evaluation of the most popular and important programming languages, and their future role in a world beyond Java. If you are agree with the book's premise--that Java's reign is coming to an end--then this book will help you start to build your skills accordingly. You can download some of the frameworks discussed and learn a few new languages. This book will teach you what a new language needs to succeed, so when things do change, you'll be more prepared. And even if you think Java is here to stay, you can use the best techniques from frameworks introduced in this book to improve what you're doing in Java today.

COBOL: A self-instructional manual
by James A. Saxon - Prentice-Hall
The COBOL system was developed to produce an English-like programming language which can be used on many different types of data processing systems. This manual has been developed to teach the beginner the fundamentals of COBOL programming.
(13430 views)

Dylan Programming: An Object-Oriented and Dynamic Language
by Neil Feinberg, et al. - Addison-Wesley
Dylan is a new programming language, that is both object-oriented, like C++ and Java, and dynamic, like Smalltalk. This book will be useful to anyone learning dynamic, object-oriented programming, whether it be in Dylan, Java, Smalltalk, or Lisp.
(7343 views)