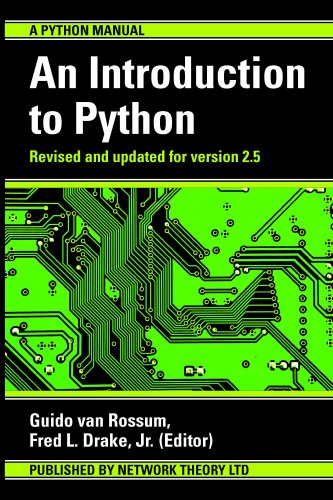 An Introduction to Python
by Guido van Rossum

Description:
This manual provides an introduction to Python, an easy to learn object-oriented programming language. It has efficient high-level data structures and a simple but effective approach to object-oriented programming. Python's elegant syntax and dynamic typing, together with its interpreted nature, make it an ideal language for scripting and rapid application development in many areas on most platforms. This is a printed copy of the official Python tutorial from the Python 2.2 distribution.

How to Think Like a Computer Scientist: Learning with Python
by Jeffrey Elkner, Allen B. Downey, Chris Meyers - Green Tea Press
This book is an introduction to computer science using the Python programming language. It covers the basics of programming, including variables, functions, control flow, program debugging. Later chapters cover basic algorithms and data structures.
(15599 views)

Python Tutorial
by Guido van Rossum - Python Software Foundation
This tutorial introduces the reader informally to the basic concepts of the Python language and system. It introduces many of Python's most noteworthy features, and will give you a good idea of the language's flavor and style.
(18075 views)

Data Structures and Algorithms with Object-Oriented Design Patterns in Python
by Bruno R. Preiss
The primary goal of this book is to promote object-oriented design using Python and to illustrate the use of the emerging object-oriented design patterns. The book shows how these patterns are used to create good software designs.
(19328 views)

Start Here: Python Programming for Beginners
by Jody Scott Ginther - toonzcat.com
This book is meant to help you begin learning the basics of Python programming version 3 or later. It is a brief introduction to Python. The author attempts to be as brief as possible to get the new programmer into programming as fast as possible.
(16493 views)