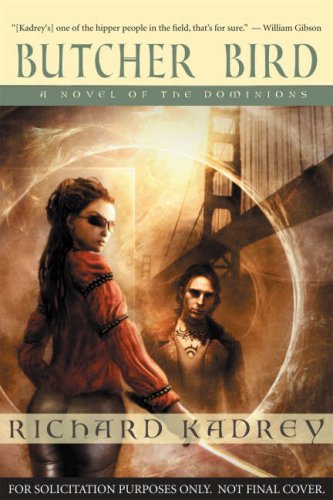 Description:
Spyder Lee is a happy man who lives in San Francisco and owns a tattoo shop. One night an angry demon tries to bite his head off before he’s saved by a stranger. The demon infected Spyder with something awful - the truth. He can suddenly see the world as it really is: full of angels and demons and monsters and monster-hunters. A world full of black magic and mysteries. These are the Dominions, parallel worlds full of wonder, beauty and horror.

Valle: Book 2 of the Heku Series
by T.M. Nielsen - Smashwords
While Chevalier and Emily come to terms with being parents, the Valle begin attacks to gain access to the last remaining Winchester, even if it means harming those she cares about. An upheaval in the Equites threatens the island's peaceful life.
(9160 views)

The Undying Monster: A Tale of the Fifth Dimension
by Jessie Douglas Kerruish - Heath Cranton Limited
For generations, the Hammand family has lived under the shadow of a deadly curse. It will sleep for a time, only to burst into deadly life; it will leave its victims with such terrible, unspeakable memories that they go mad with the knowledge of it.
(4728 views)

Varney the Vampire
by Thomas Preskett Prest - Project Gutenberg
Nothing has been omitted in the life of the unhappy Varney, which could throw a light upon his career, and the fact of his death made a great noise at the time through Europe and is to be found in the public prints for the year 1713.
(6136 views)

Zastrozzi
by Percy Bysshe Shelley - George Wilkie and John Robinson
The first of Shelley's two early Gothic prose romances. This sensationalist novel presents some of Shelley's earliest thoughts on irresponsible self-indulgence and revenge, and offers remarkable insight into an imagination that is strikingly modern.
(3221 views)