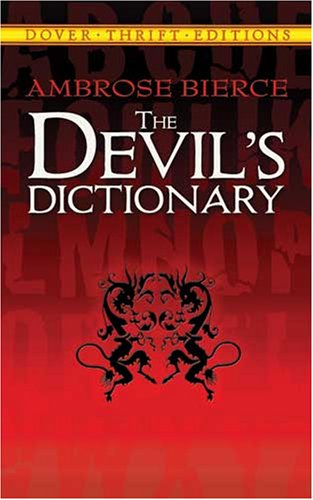 The Devil's Dictionary
by Ambrose Bierce

Description:
Satiric lexicon by Ambrose Bierce, first compiled as The Cynic's Word Book in 1906. The barbed definitions that Bierce began publishing in a weekly journal he edited in San Francisco, brought this 19th-century stock form to a new level of artistry. Employing a terse, aphoristic style, Bierce lampooned social, professional, and religious convention, as in his definitions for bore--"A person who talks when you wish him to listen"; architect--"One who drafts a plan of your house, and plans a draft of your money"; and saint--"A dead sinner revised and edited."

The Funniest Five Thousand Jokes, part 1
by Eric Landa - Smashwords
This first book contains five thousand jokes from a variety of sources from both famous and ordinary people. Hopefully they'll bring a smile to your face, a grin to your mouth and maybe make your fingers scratch your head every now and then ...
(4938 views)

They Win. You Lose.
by Stan Arnold - Smashwords
This is the first book of The Implosion Trilogy - stories about Mick and Jim, two Soho-based video producers who drink too much, don't earn enough and get too many death threats. In this book, Mick and Jim are on the run from Vlad and Vic ...
(4340 views)

A Plague of Hearts
by Patrick Whittaker - Feedbooks
On an otherwise normal day in Wonderland, the Knave of Hearts is arrested by the secret police. Outraged by what he believes to be an injustice, his valet, the March Hare, sets out to free him. Along the way he attends a mad tea party ...
(5051 views)