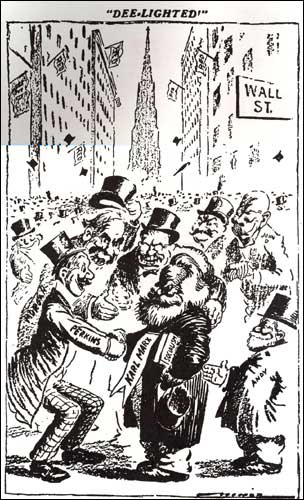 Wall Street and the Bolshevik Revolution
by Antony C. Sutton

Description:
The State Department Decimal File contains extensive documentation on the hypothesized link between Wall Street and the Bolshevik Revolution. When the evidence in these official papers is merged with nonofficial evidence from biographies, personal papers, and conventional histories, a truly fascinating story emerges. We find there was a link between some New York international bankers and many revolutionaries, including Bolsheviks. These banking gentlemen, who are here identified, had a financial stake in, and were rooting for, the success of the Bolshevik Revolution.

Hitler's Shadow: Nazi War Criminals, U.S. Intelligence, and the Cold War
by Richard Breitman, Norman J.W. Goda - The National Archives
This book is based on newly declassified and analyzed government documents. It documents how Western intelligence agencies declined to prosecute war criminals -- often men responsible for the deaths of thousands of Jews and others ...
(4880 views)

The Story of Mankind
by Hendrik van Loon - Boni and Liveright
This book, for history buffs and the historically challenged alike, covers human history from prehistoric times, when our earliest ancestors were learning to communicate with grunts, right through to the issues of the latter 20th century.
(13890 views)