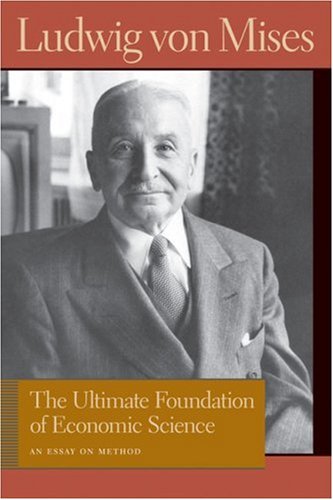 The Ultimate Foundation of Economic Science
by Ludwig von Mises

Description:
In this volume, Mises argued that economics is a science because human action is a natural order of life and that it is the actions of humans that determine markets and capital decisions. Since Mises believed these links could be proven scientifically, he concluded that economics, with its basis on that human action, is indeed a science in its own right and not an ideology or a metaphysical doctrine. What has been described as his most passionate work, "The Ultimate Foundation of Economic Science" brings together all of the themes from Mises's previous work.

New Rules for the New Economy
by Kevin Kelly - Penguin
In this book Kelly tries to encapsulate the characteristics of the new economic order by laying out 10 rules for how the wired world operates. The result is a thought-provoking look at the behavior of networks and their effect on our economic lives.
(17546 views)

Modeling Bounded Rationality
by Ariel Rubinstein - The MIT Press
The author considers the modeling of choice, the modeling of procedural rationality, knowledge, memory, the choice of what to know, and group decisions. The second part discusses the fundamental difficulties of modeling bounded rationality in games.
(11556 views)

Pillars of Prosperity: Free Markets, Honest Money, Private Property
by Ron Paul - Mises Institute
This economic manifesto by Ron Paul collects his greatest speeches and debates. He provided a coherent explanation of everything the government has done wrong in this area. He also provides a way out: free market, honest money, and private property.
(11868 views)

Economic Fables
by Ariel Rubinstein - Open Book Publishers
Part memoir, part crash-course in economic theory, this deeply engaging book by one of the world's foremost economists looks at economic ideas through a personal lens. Rubinstein challenges many of the central tenets of game theory.
(5638 views)