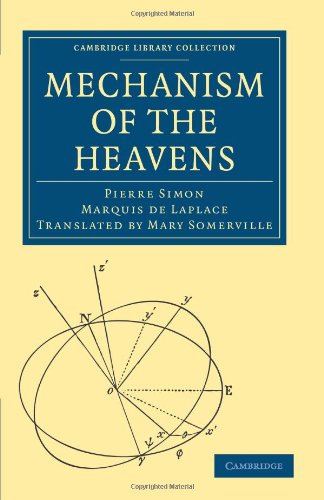 Mechanism of the Heavens
by Mary Somerville

Description:
The Mechanism of the Heavens (1831) was the first english language "rendition" of Pierre Simon Laplace's five volume Mécanique céleste. In this work Somerville, who was later known for her predition of the then undiscovered planets Neptune and Pluto, introduced continental mathematics to english speaking readers for the first time. This led to a revolution in mathematics in the UK, beginning at Cambridge University where the Mechanism of the Heavens became a standard text in courses on higher mathematics.

Mathematical Theories of Planetary Motions
by Otto Dziobek - The Register Pub. Co.
This work is intended as an introduction to the special study of astronomy for the student of mathematics. The author has endeavored to produce a book which shall be so near the present state of the science as to include recent investigations ...
(5532 views)

An Introduction to Celestial Mechanics
by Richard Fitzpatrick - The University of Texas at Austin
This book will bridge the gap between standard undergraduate treatments of celestial mechanics, which rarely advance beyond two-body orbit theory, and full-blown graduate treatments. A knowledge of elementary Newtonian mechanics is assumed.
(11053 views)

Planetary Theory
by Ernest Brown, Clarence Shook - Cambridge University Press
The purpose of this volume is the development of methods for the calculation of the general orbit of a planet. We attempted to anticipate the difficulties which arise, by setting forth the various devices which may be utilized when needed.
(14021 views)