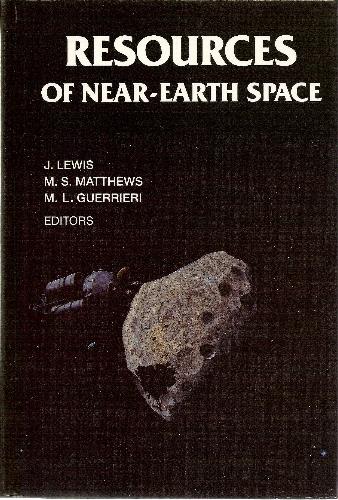 Description:
The parts of the solar system that are most accessible from Earth (the Moon, the near-Earth asteroids, and Mars and its moons) are rich in materials of great potential value to humanity. Immediate uses of these resources to manufacture propellants, structural metals, refractories, life-support fluids and glass can support future large-scale space activities. In the longterm, non-terrestrial sources of rare materials and energy may be of great importance here on Earth.

To a Rocky Moon: A Geologist's History of Lunar Exploration
by Don E. Wilhelms - University of Arizona Press
Don Wilhelms was a member of the Apollo Scientific Team. In this book he describes his role, along with his colleagues, during the Apollo explorations of the Moon. He presents a brief history of the theories associated with the origin of the moon.
(7635 views)

Vision and Voyages for Planetary Science in the Decade 2013-2022
- National Academy of Sciences
This book surveys the current state of knowledge of the solar system and recommends a suite of planetary science flagship missions for the decade 2013-2022 that could provide a steady stream of important new discoveries about the solar system.
(6430 views)

Voyager Encounters Jupiter
- National Aeronautics and Space Administration
Passing by Jupiter in 1979, the Voyager spacecraft have collected an enormous amount of data that may prove to be a keystone in understanding our solar system. This publication provides an early look at the Jovian planetary system ...
(3762 views)

Atomic and Molecular Processes in Astronomy and Planetary Science
by Geoffrey A. Blake - California Institute of Technology
This course discusses the fundamental aspects of atomic and molecular spectra that enable one to infer physical conditions in astronomical, planetary and terrestrial environments from the analysis of their electromagnetic radiation.
(11460 views)