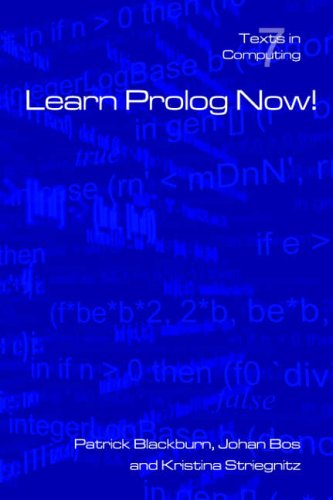 Description:
This is one of the most popular introductions to the Prolog programming language, an introduction prized for its clarity and down-to-earth approach. It is widely used as a textbook at university departments around the world, and even more widely used for self study.

Simply Logical: Intelligent Reasoning by Example
by Peter Flach - John Wiley
An introduction to Prolog programming for artificial intelligence covering both basic and advanced AI material. A unique advantage to this work is the combination of AI, Prolog and Logic. Each technique is accompanied by a program implementing it.
(5678 views)

Prolog Programming
by Roman Bartak
Prolog is a programming language with precise operational meaning that borrows its basic concepts from logic programming. This text is an introduction to logic programming and Prolog for beginners but it also covers some advanced topics.
(11022 views)

An Introduction to Logic Programming through Prolog
by Michael Spivey - Prentice Hall
Using theory as a foundation for practical programming, this text presents the theory of logic programming with clear proofs and implementation techniques. It covers logical theory, programming, and the structure of a simple Prolog implementation.
(12050 views)

The Power of Prolog
by Markus Triska - metalevel.at
The goal of this material is to bridge the gap between the great Prolog textbooks of the past and the language as it currently is, several decades after these books were written. You will see that many limitations of the past are no longer relevant.
(3920 views)