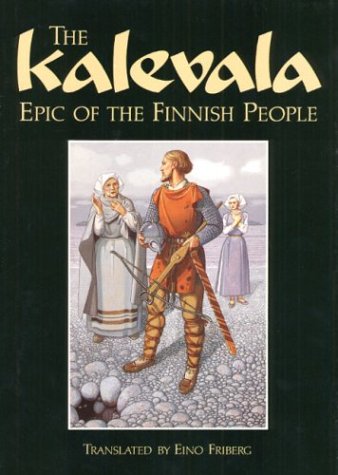 The Kalevala
by Elias Lönnrot

Description:
The Kalevala is a book and epic poem which Elias Lonnrot compiled from Finnish and Karelian folklore in the nineteenth century. It is held to be the national epic of Finland and is traditionally thought of as one of the most significant works of Finnish literature.

Moonlit Journey
by Owen Johnston
Please join me on this quest through dark passages -- yet there are rays of hope throughout as we seek paradise. This book contains a range of poetic and prosaic writing styles in one compilation that is thick with liminalism and imagery.
(6887 views)

The Raven
by Edgar Allan Poe
The Raven is a narrative poem by Edgar Allan Poe. It is often noted for its musicality, stylized language, and supernatural atmosphere. It tells of a talking raven's mysterious visit to a distraught lover, tracing the man's slow descent into madness.
(8518 views)

Rhymes and Meters: a practical manual for versifiers
by Horatio Winslow - The Editor Publishing Company
This book arranges in a convenient form the fundamentals of verse -- enough for the student who takes up verse as a literary exercise or for the older verse writer who has fallen into a rut or who is a bit shaky on theory.
(9391 views)

HIS-tory
by Steve R. - Smashwords
A book of poetry powerfully expressing the different accounts of Barack Hussein Obama, President of the United States of America, during his ascension toward the White House. Taking extreme care in keeping it challenging and stimulating ...
(2461 views)