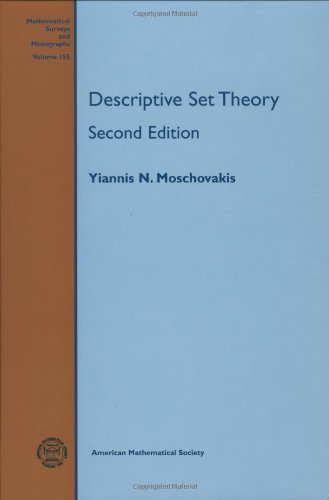 Description:
Descriptive Set Theory is the study of sets in separable, complete metric spaces that can be defined, and so can be expected to have special properties not enjoyed by arbitrary pointsets. This monograph develops Descriptive Set Theory systematically, from its classical roots to the modern "effective" theory and the consequences of strong hypotheses. The book emphasizes the foundations of the subject, and it sets the stage for the dramatic results relating large cardinals and determinacy or allowing applications of Descriptive Set Theory to classical mathematics.

Descriptive Set Theory
by David Marker - University of Illinois at Chicago
These are informal notes for a course in Descriptive Set Theory. While I hope to give a fairly broad survey of the subject we will be concentrating on problems about group actions, particularly those motivated by Vaught's conjecture.
(6758 views)

An Introduction to Set Theory
by William A. R. Weiss - University of Toronto
These notes for a graduate course in set theory cover the axioms of set theory, the natural numbers, the ordinal numbers, relations and orderings, cardinality, the real numbers, the universe, reflection, elementary submodels, and constructibility.
(15855 views)