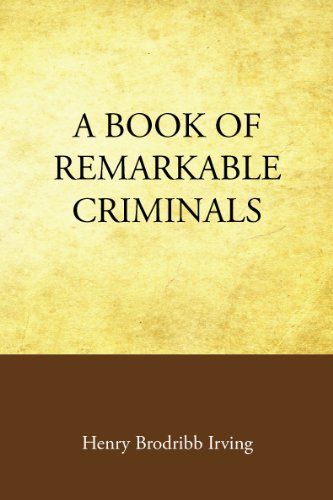 A Book of Remarkable Criminals
by Henry Brodribb Irving

Description:
Greed, love of pleasure, lust, idleness, anger, hatred, revenge, these are the chief causes of crime. These passions and desires are shared by rich and poor alike, by the educated and uneducated. They are inherent in human nature; the germ is in every man.

Film Piracy, Organized Crime, and Terrorism
by Gregory F. Treverton, at al. - RAND Corporation
This report presents the research of the involvement of organized crime and terrorist groups in counterfeiting products ranging from watches to computer software. It presents detailed case studies in one area of counterfeiting, film piracy.
(9093 views)

Curious Punishments of Bygone Days
by Alice Morse Earle - Loompanics Unlimited
An accumulation of notes on old-time laws, punishments and penalties. The subject is not a pleasant one, though it often has a humorous element; but a punishment that is obsolete gains an interest and dignity from antiquity.
(8646 views)

Finger Prints
by Sir Francis Galton - Macmillan and Co.
The book discusses the evidence validating fingerprints as a means of personal identification, permanence of the fingerprint characteristics, uniqueness of an assemblage of ridge details, the variability and classifiable nature of patterns, etc.
(8575 views)