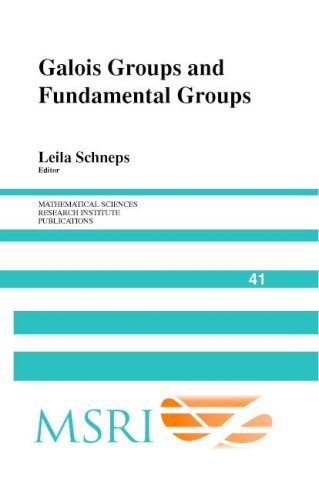 Description:
This book contains eight articles which focus on presenting recently developed new aspects of the theory of Galois groups and fundamental groups, avoiding classical aspects which have already been developed at length in the standard literature. Each article strives to be introductory, while containing original results.

Notes on Categories and Groupoids
by P. J. Higgins - Van Nostrand Reinhold
A self-contained account of the elementary theory of groupoids and some of its uses in group theory and topology. Category theory appears as a secondary topic whenever it is relevant to the main issue, and its treatment is by no means systematic.
(14110 views)

Lectures on Semi-group Theory and its Application to Cauchy's Problem in Partial Differential Equations
by K. Yosida - Tata Institute of Fundamental Research
In these lectures, we shall be concerned with the differentiability and the representation of one-parameter semi-groups of bounded linear operators on a Banach space and their applications to the initial value problem for differential equations.
(10962 views)

Smarandache Semigroups
by W. B. Vasantha Kandasamy - American Research Press
The Smarandache semigroups exhibit properties of both a group and a semigroup simultaneously. This book assumes the reader to have a good background on group theory; we give some recollection about groups and some of its properties for reference.
(9300 views)

Frobenius Splittings and B-Modules
by Wilberd van der Kallen - Springer
The course given by the author in 1992 explains the solution by O. Mathieu of some conjectures in the representation theory of arbitrary semisimple algebraic groups. The conjectures concern filtrations of 'standard' representations.
(8000 views)