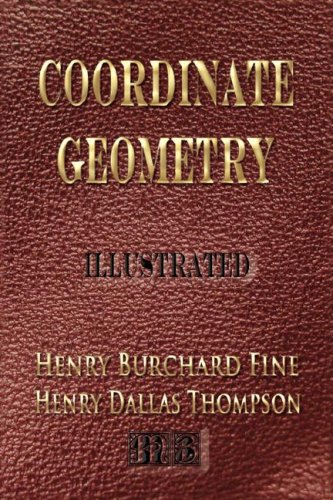 Description:
Contents: Coordinates; The Straight Line; The Circle; The Parabola; The Ellipse; The Hyperbola; Transformation Of Coordinates; The General Equation Of The Second Degree; Sections Of A Cone; Systems Of Conics; Tangents And Polars Of The Conic; Polar Coordinates; Equations And Graphics Of Certain Curves; Problems On Loci; etc.

The Modern Geometry of the Triangle
by William Gallatly - F. Hodgson
The author expresses his expectation, that these novel and interesting theorems some British, but the greater part derived from French and German sources will widen the outlook of our mathematical instructors and lend new vigour to their teaching.
(5230 views)

Euclid's Elements
by D.E.Joyce
Online edition of Euclid's Elements, one of the most beautiful and influential works of science in the history of humankind. The text of all 13 Books is complete, and all of the figures are illustrated using a Java applet called the Geometry Applet.
(15613 views)

Theory of Symmetry and Ornament
by Slavik V. Jablan - Matematicki Institut
This work is a comparative analysis of the theory of discrete and visually presentable continuous symmetry groups in the plane E2 or in E2\{O}: Symmetry Groups of Rosettes, Friezes and Ornaments, Similarity Symmetry Groups in E2, etc.
(11961 views)

A. N. Whitehead's Geometric Algebra
by Stephen Blake
This is a text on 3-d Euclidean computational geometry intended to be used in engineering applications. On the other hand, the methods of Whitehead's algebra enable us to readily deal with Euclidean and non-Euclidean spaces of any dimension.
(15229 views)