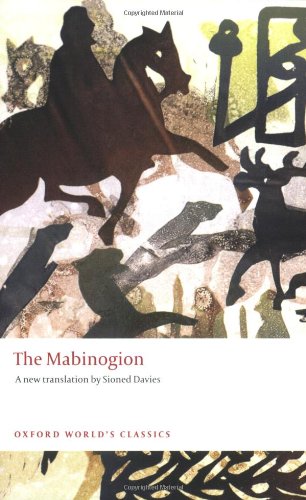 Description:
Celtic mythology, Arthurian romance, Welsh history--these are just some of the threads woven into the eleven magical tales that make up The Mabinogion. Here are stories full of colorful characters, such as Gwydion the shape-shifter and Math the magician. Dragons, witches, and giants live alongside kings and heroes, and quests of honor, revenge, and love are set against the backdrop of a country struggling to retain its independence.

The Chinese Fairy Book
by R. Wilhelm - Frederick A. Stokes Company
These fairy tales from ancient China have a Far Eastern glow about them. Some, like The Lady of the Moon, are exquisitely poetic. Others, such as The Kindly Magician, are filled with black magic. All tales will appeal to young and old alike.
(9613 views)

The Rose and the Ring
by William Makepeace Thackeray
The Rose and the Ring is one of those special literary treats which happen when a writer for adults turns (in this case) his attention to the world of children. It's a classic fairy tale, told with Thackeray's customary insight into characters.
(9037 views)

The Blue Fairy Book
by Andrew Lang
Classic selection of fairy tales: Little Red Riding-Hood, The Sleeping Beauty in the Wood, Cinderella, Aladdin and the Wonderful Lamp, Rumpelstiltzkin, Beauty and the Beast, Puss in Boots, The Forty Thieves, Hansel and Grettel, The Goose-Girl, etc.
(11912 views)

The King of the Golden River
by John Ruskin - Smith, Elder & Co.
John Ruskin's 19th-century fairy tale, in which a strange dwarf effects the punishment of two cruel older brothers and the ultimate success of the kind young one. Richard Doyle's illustrations embody the author's ideas with characteristic spirit.
(11090 views)