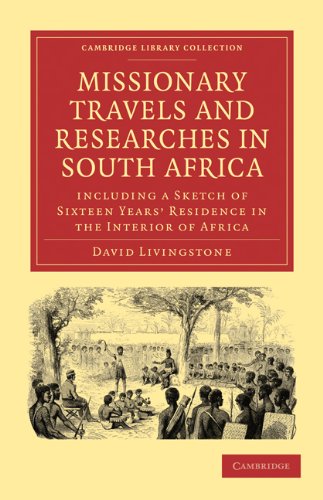 Missionary Travels and Researches in South Africa
by David Livingstone

Description:
This absorbing narrative by the world famous explorer and Christian missionary, David Livingstone, was first published in 1857. Livingstone's book describes in careful detail his travels and work in parts of southern and central Africa previously unknown to Europeans. It distils the experiences and observations of sixteen years during which Livingstone bravely faced the challenges of climate, terrain and tropical disease, travelling in a small group and adopting a non-confrontational approach to the local populations.

The Lake Regions of Central Africa: a picture of exploration
by Richard F. Burton - Longman, Green, Longman, and Roberts
Burton's detailed account of three years of difficult travel between Zanzibar and Lake Tanganyika, circa the late 1850's. An engrossing record of explorations and acute observations on village life, native character, religion and government.
(2602 views)

Africa Overland
by David Hardham - Smashwords
Through the eyes of a 22 year old Australian, we get to hear firsthand the trip of a life time as he crosses the African continent from north to south with a group of fellow adventurers with a specialist overland travel company in 1971.
(5871 views)

The Man-Eaters of Tsavo
by J. H. Patterson - Macmillan and co
The book details the author's adventures in East Africa at the turn of the century. His story is riveting: Petterson single-handedly tracked and killed the lions that devoured 28 of his Indian workers as well as countless African natives.
(14856 views)

Travels in West Africa
by Mary H. Kingsley - Macmillan and co.
The breathtaking, edifying and hilariously entertaining autobiographical tale of the famous British 19th century female explorer, who traveled all by herself into the deepest West African jungle and loved every life-threatening moment of it.
(10855 views)