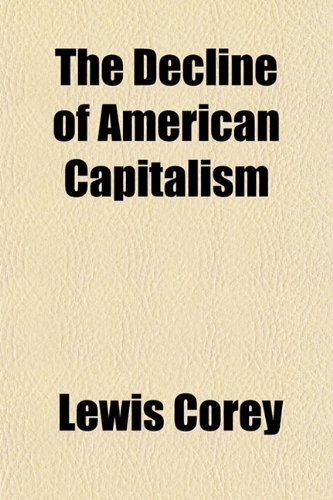 The Decline of American Capitalism
by Lewis Corey

Description:
The depression which set in after 1929 was the worst economic disaster in American history. It was aggravated by the acute world crisis, a major catastrophe of capitalism. The revival, largely because of its inflationary and speculative character, did not lead to recovery.

Capitalism: A Treatise on Economics
by George Reisman - Jameson Books
Reisman's ringing manifesto for laissez-faire capitalism free of all government intervention is at once a conservative polemic and a monumental treatise, brimming with original theories, remarkable for its depth, scope and rigorous argument.
(15643 views)

The Morality of Capitalism: What Your Professors Won't Tell You
by Tom Palmer - Smashwords
This book is about the moral justification of what philosopher Robert Nozick called 'capitalist acts among consenting adults'. It's about the system of cooperative production and free exchange characterized by the predominance of such acts.
(5057 views)

The Efficient Use of Energy Resources
by William D. Nordhaus - Yale University Press
The fundamental economic question about energy resources is: How fast should we consume our low-cost resources? Second, there are abundant, but less attractive, resources that may be used when the low-cost resources run thin.
(8017 views)

Aftershocks: Economic Crisis and Institutional Choice
by A. Hemerijck, B. Knapen, E. van Doorne (eds.) - Amsterdam University Press
The book contains essays based on interviews with leading scholars, politicians and representatives from the world of business. They reflect on the origins of the crisis as well as the possible economic and political transformations it may engender.
(6552 views)