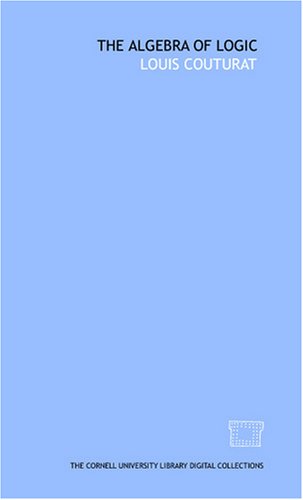 The Algebra of Logic
by Louis Couturat

Description:
Mathematical Logic is a necessary preliminary to logical Mathematics. The present work is concerned with the "calculus ratiocinator" aspect, and shows, in an admirably succinct form, the beauty, symmetry and simplicity of the calculus of logic regarded as an algebra.

The Principles Of Mathematics
by Bertrand Russell - W. W. Norton & Company
Russell's classic sets forth his landmark thesis that mathematics and logic are identical -- that what is called mathematics is simply later deductions from logical premises. His ideas have had a profound influence on the foundations of mathematics.
(11852 views)

Logic for Computer Scientists
by Uli Furbach - Wikibooks
This book is intended for computer scientists and it assumes only some basic mathematical notions like relations and orderings. The aim was to create an interactive script where logics can be experienced by interaction and experimentation.
(8609 views)

A Second Course in Logic
by Christopher Gauker - University of Cincinnati
This book is for anyone who has had a solid introductory logic course and wants more. Topics covered include soundness and completeness for first-order logic, Tarski's theorem on the undefinability of truth, Godel's incompleteness theorems, etc.
(10855 views)